release notes
a month ago

CloudCheckr is introducing a new pane type called Profit Analysis which allows CMx users to view profit broken down in a variety of customizable ways. CMx users may view their profit by cloud account over a user configured timeline. The total cost is broken down by unblended cost and list cost, while the profit achieved is highlighted. CMx users may filter their results by Service Category and Resource Tags, and configure their preferred chart type.

CMx users with access to both actual (unblended) cost and list cost may build a dashboard consisting of multiple Profit Analysis panes to break down their profit by several key Service Categories, and over various timelines. 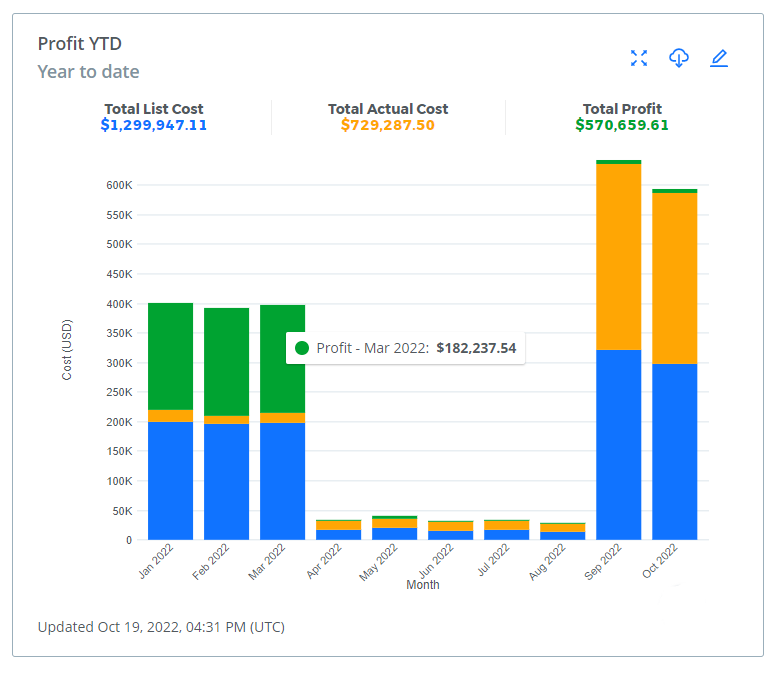 The process within CloudCheckr for calculating the Retail rate with Azure has been improved. Unfortunately in some cases Azure is not making available a meter and price, resulting in costs ingested with an unmatched Retail Meter being calculated at a rate of $0.

To avoid this situation, when no matching Azure cost can be identified for a given meter to ingested, CloudCheckr is now passing through Azure Standard cost instead. This ensures that no Retail price will be represented at a lower value than the actual cost, helping those customers who invoice or recover costs based on Retail cost type.

release notes
a month ago

To see the complete list of recommendations for their own accounts, MSP customers who access CloudCheckr at the L2 level can now navigate to:

As reported in-application, Microsoft has intermittently and unexpectedly changed the format of its Tag data response such that the JSON cannot be parsed, inhibiting cost ingestion for many but not all Payers.

While Microsoft works to address this issue, CloudCheckr has developed workaround code that will allow costs to be ingested, with the tag import skipped for any data rows impacted.

This workaround code was deployed as part of Release 27.5 (July 15 in US Production), and only skips the tag if the JSON is in the improper format. Please note that all features related to tags may contain inaccurate data until this issue has been addressed by Microsoft. CloudCheckr is logging the “skipped row” event so that CloudCheckr Support can properly respond to any questions you may have.

Beginning with Release 27.1 on May 19, CloudCheckr is now calculating the retail rate for reservation purchases (both CSP and EA). This will automatically start applying for both the current, and all future months.

If you wish to update historic months, please contact CloudCheckr Technical Support or your Technical Account Manager (TAM) to get those months updated.

It is our expectation that the Retail and Standard costs portrayed in the platform will reflect the business arrangements that you and your customers may have with Microsoft.

We have seen some scenarios under CSP where the retail cost for the reservation purchase matches the actual cost.  We have an open ticket with Microsoft to understand why this and if it is expected under certain conditions.

Note: While we collect the reservations during the month they are purchased, the purchase fees themselves will not appear until the invoice is made available by Microsoft.

API Deprecation and Replacement (Azure Only)

CloudCheckr has deprecated the API call “get_detailed_billing_with_grouping_v2” on Azure only.

The same data is available via “get_detailed_billing_with_grouping_by_currency” to obtain the required data.

The EC2 Reserved Instance Rebalancer Report has been removed from CloudCheckr with Release 27.3 on June 20. This feature was no longer in use and determined to be obsolete.

CloudCheckr has deprecated four BPCs which relate to older scenarios no longer well-contemplated in code:

These need to be considered at the Consolidated Family level and CloudCheckr has a number of reports at this level available in the Payer Account, such as the EC2 RI Purchase Recommendations report. These can be accessed via Cost > Reserved Usage > Recommendations: 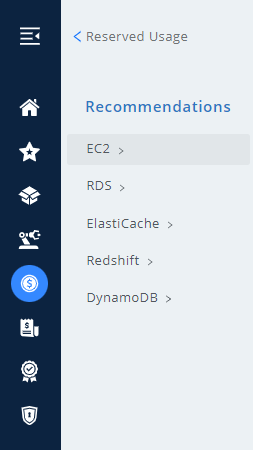 AWS has always given away free tiers, and the CloudCheckr Tier Compression feature is designed to allow MSPs to give away the free tier to each customer who might otherwise choose to work with AWS directly to receive this benefit.

AWS released changes this year that increased the time-frame in which free tier was applicable (formerly it would only last the first 12 months). Additionally, their changes implemented new thresholds of Storage, Data-Transfer & CloudFront usage that would be covered by free tier. CloudCheckr has updated free-tier calculations to accommodate these changes.

One of the common implications of free tier is that MSPs must face the choice of giving away this larger amount free to each customer, or risk losing them to a direct AWS relationship. MSPs utilizing AWS’ model are subject to their consolidated billing structure. This means that these thresholds are seen across the whole bill and are not definable on a ‘per-customer’ basis. MSPs and customers utilizing CloudCheckr’s Account Family feature are able to further segregate groupings of accounts and treat them as their own bill. The free tier changes extend to the Account Family functionality as well. Each Account Family will be treated with the new thresholds as if it were its own bill, instead of looking at the totality of the consolidated bill’s spend.

AWS provides what are called Solution Provider Program discounts. These discounts come in the form of credits from AWS, based on the program agreement that you enter into with AWS. Although the SPP program discounts cover a large array of services, some services have new branches of offerings that are not a part of the SPP authorized services list.

Include Credits in Custom Billing Charges

You can now choose to include Savings Plans Negation credits and/or All other credits when creating an “Add a percent discount or premium for all charges” and “Add a monthly percent charge or credit” Custom Charge. The default setting is to exclude both credits

You are now able to access CloudCheckr’s help resources straight from the app! The Help Bot, located on the Navigation pane, allows you to browse the CloudCheckr Success Center without leaving CloudCheckr CMx, it also holds links to other resources including our Online Learning Portal and the Product Announcements and Release Notes page. In addition to those resources, there is a tab within the bot to provide feedback on your experience with CloudCheckr. 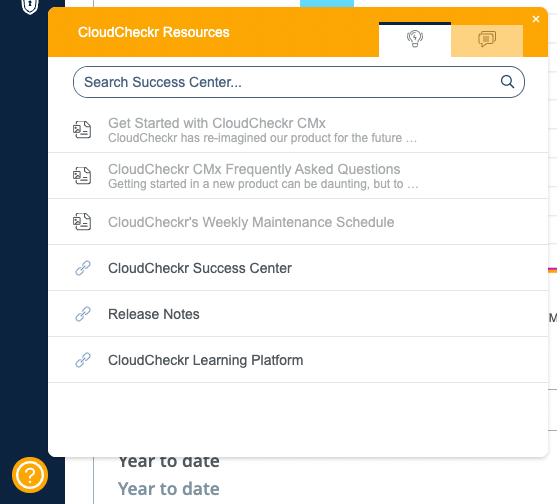 Reserved Instances (RIs) and Savings Plans (SPs) can offer discounts, depending on their commitment plan, yet many businesses forgo the benefit and lose out on their potential savings rates. On top of that, managing the on-going changes and predicting long-term use is challenging and time consuming for most organizations. The solution? 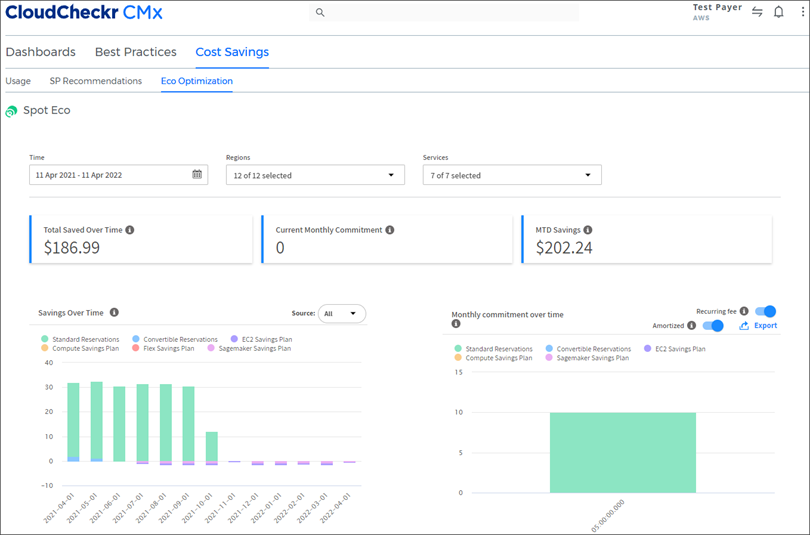 Using deep analytics, forecasting models, and the Reserved Instance Marketplace, Eco automatically purchases the optimal portfolio of commitments for you. Eco uses real-time tracking of RI and savings plan utilization to identify any decrease in usage so that instances can be sold back to the AWS Marketplace, if needed. 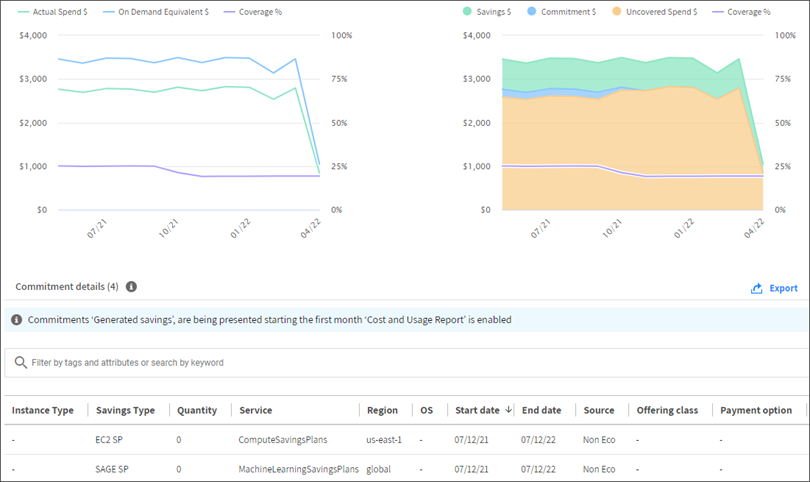 Eco enables you to get the most out of cloud commitment purchases, including:

For more information on how MSPs can take advantage of the Eco Optimization integration within CloudCheckr CMx, please contact your Technical Account Manager.

Did you miss one of our webinars detailing new features and updates for CMx? Our archive of past Customer Success webinars can now be found in the Training / Education section of the Success Center. 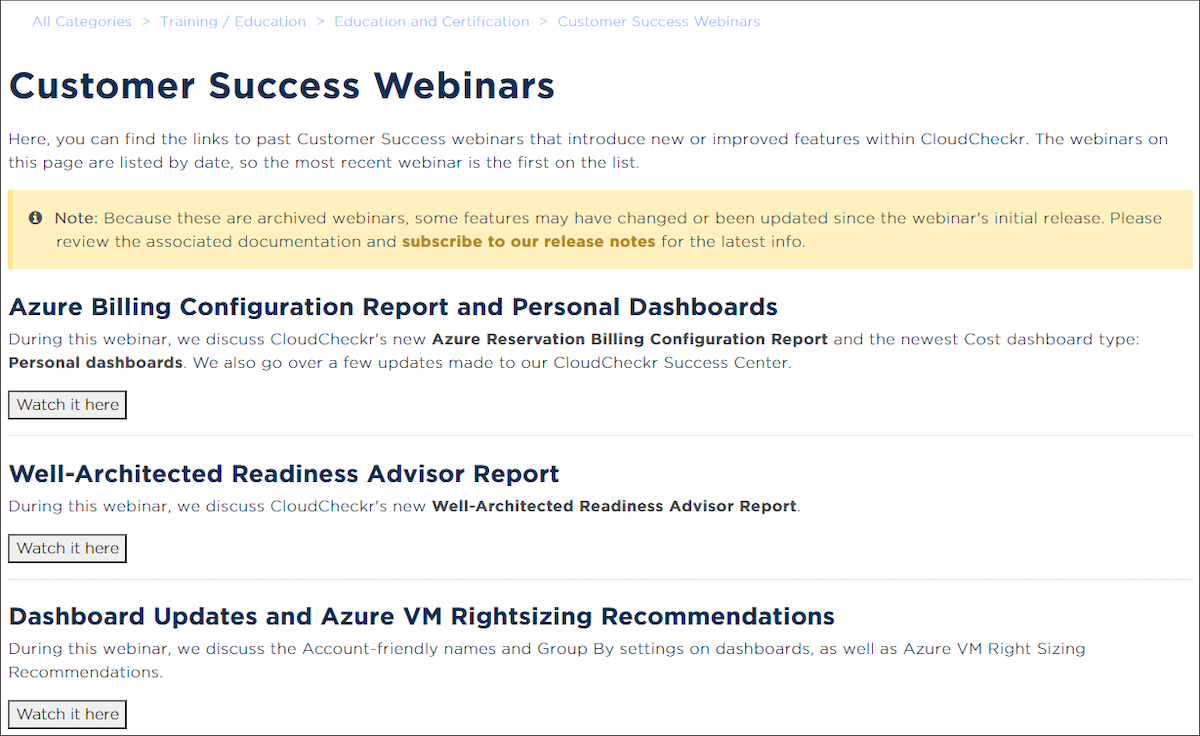 Check out the archive

Have you ever wanted to create a dashboard of cost consumption and spend for a very specific workload that only you want more information about? Or create dashboards without interrupting shared content across teams or partners? Personal dashboards are here!

With these dashboards, any user with access to cost data and reports can create their own dashboards as a one-stop shop for the data most relevant to them. 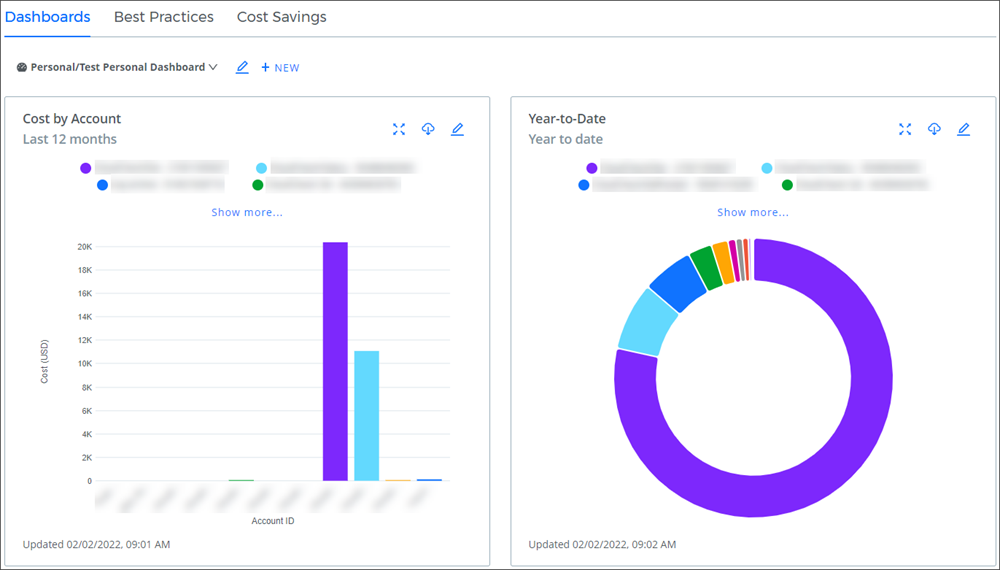 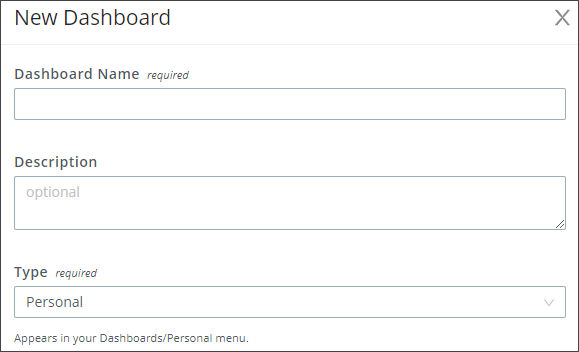 You can then select your dashboard the new Personal category using the Dashboard drop-down menu. 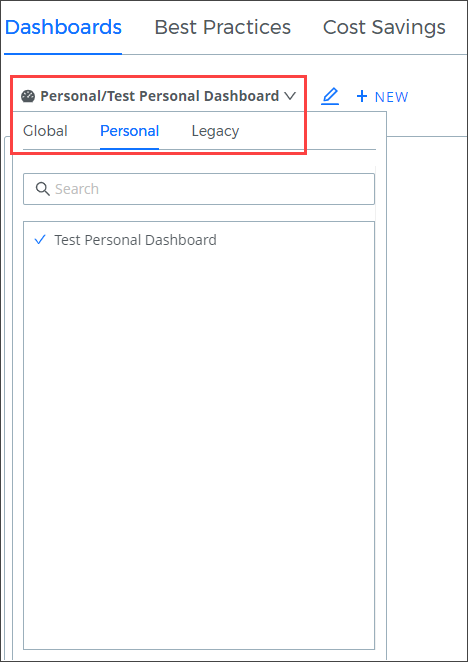 CloudCheckr’s new Azure Reservation Billing Configuration report allows CSPs to choose how Azure reservation fees are applied across their customers and subscriptions. You can set default fee assignment behavior and control fee assignment on a per-reservation basis, ensuring your chargebacks and invoices reflect the fees exactly how you need them.

The report shows all of the reservations owned within your CSP. You can use the controls on the page to filter the list by searching for specific Reservation IDs, Reservation Order IDs, or by Customer.

The CloudCheckr Success Center has been reorganized to help you find the information you need more quickly and easily. Previously, finding a specific topic could be difficult, as it could have been living under buried headings. Now, for example, if you're looking for a topic related to Cost, you'll find it under the Cost heading. 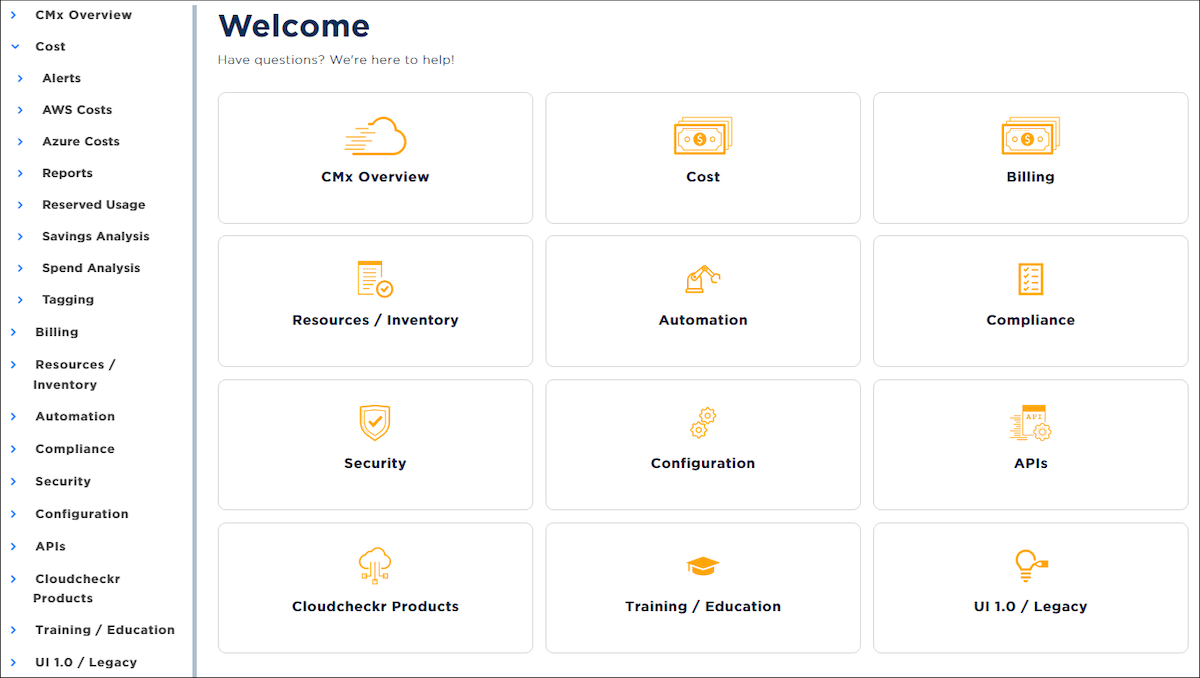 It's important to note that nothing has been deleted, and all custom URLs still work.  With this update our topics just now live in more straightforward categories.

Note: On the Home page, the drop-down box for each category currently opens at the bottom of the page. This will be fixed in an upcoming release.

Please note that a reload is required to have these changes applied against any historic months.

We have updated our CIS Benchmark report to version 1.4.  This update required several changes to our existing report, including re-ordering and re-numbering most of the controls. Additionally, we've changed the Scored/Not Scored column to Manual/Automated.

We have also added the following best practice checks:

Note: The IAM policy associated with your AWS account will need the following new permissions to fully support these updates:
"s3:GetBucketPublicAccessBlock"
"s3:GetBucketVersioning"
"ec2:GetEbsEncryptionByDefault"

release notes
a year ago

This new report, which can be found under the Total Compliance menu of the report navigation, automatically centralizes CloudCheckr's Best Practice Checks and aligns them with their respective Well-Architected Review questions. 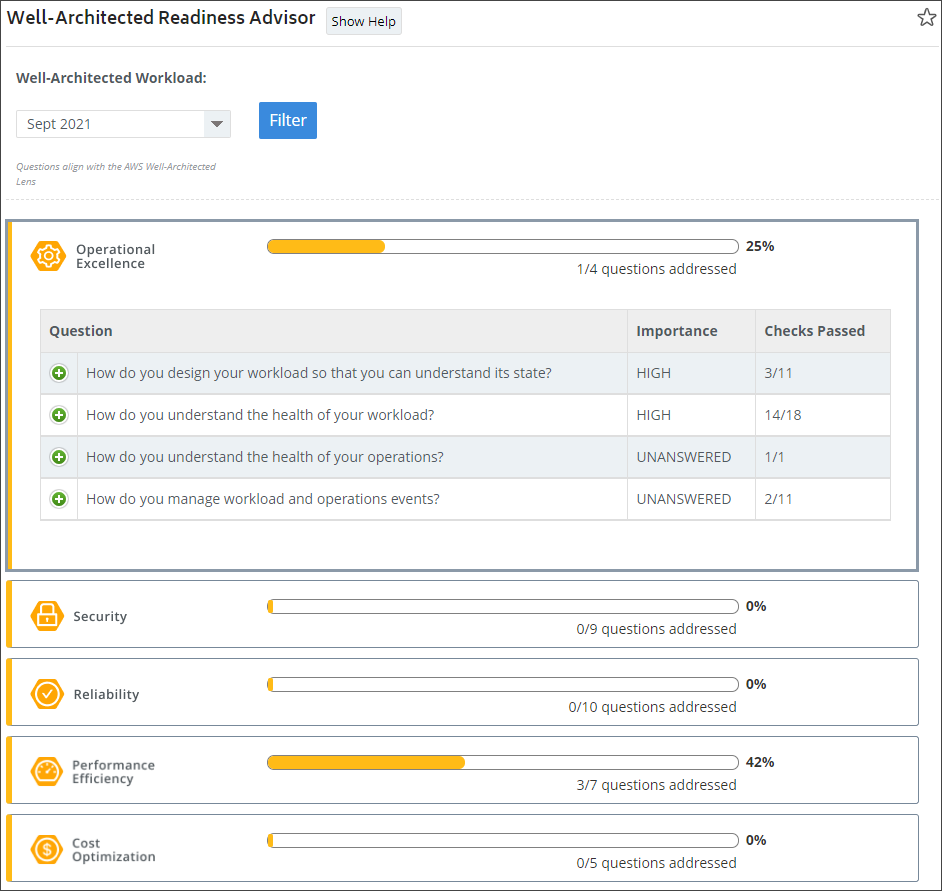